I know…great, another list on the Internet.  Before I get to “handling criticism” I had to bring these up because they keep happening over and over.

Here are some very common mistakes that I’m seeing almost every week at various open mics.  Though vaguely mentioned here, they’re all covered thoroughly in my book with explanations (other than because I said so).  My book explains “why” with examples of things that have happened to me or from advice from comedians much more experienced and famous than me.  I’m not pointing these out to be an arrogant ass of sorts, I made these mistakes too.  (If it sounds like my tone is harsh, then imagine me saying these with a lisp to sound less threatening…)

1.  Starting a punchline with the wrong word.  There’s one specific, but very common word used over and over that never works for an effective punchline, but comics keep trying to use it.  “Apparently…”  This angle rarely works.  It takes the punch out of the punchline because you’re trying to state something so obvious that even the crowd expects it.  “Apparently my ex-girlfriend found it strange that I was washing her windows in the middle of the night…”

2.  Promotion…While some people aren’t screwing this up too badly, others are so far off that club managers know of them because they’re so awful at it.  That becomes a permanent scar on your reputation and you’ll never get work once a club manager discovers you this way.  No comic is too insignificant to be gossipped about and made fun of by working comics and managers.  You’d really be surprised whose names come up for all the wrong reasons.

3.  Wardrobe…Obviously I’m anti-shorts, but there are a bunch of other mistakes being made as well.  Even a few tips for the ladies are mentioned (I had a female comic, Maria Shehata, to help write this section in the book).

4.  Being dirty…What are the rules?  How clean does a person need to be?  It’s explained in depth with many reasons.

5.  Career crippling mistakes…Things comics do that will always prevent them from ever getting emcee work which is the gateway to becoming a professional comic.  There are comics who have been performing at open mic for years but have never been paid once.  Often it has nothing to do with them not being funny enough.

To read and learn about these things simply click the link on this page or visit www.robdurhamcomedy.com to order a copy of my book to figure out how you can take the next step towards making money to perform.  Or if you need to wait until that next paycheck I’ll be doing some local book signings around St. Louis.  The next one is Febraury 4th and each purchase will get you two tickets to the St. Louis Funnybone… 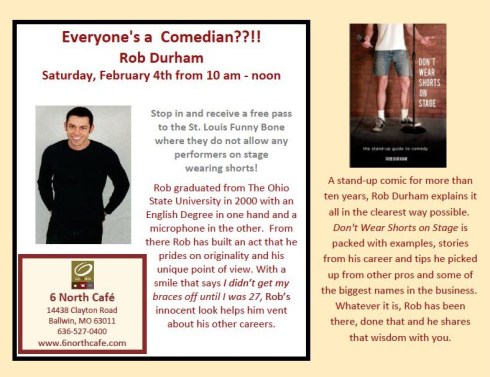 How to deal with hecklers

Order a copy of Don’t Wear Shorts on Stage