This whole post was inspired by something that happened this morning. I’ll explain…

There’s an old piece of advice to never turn down stage time. Afterall, a comic starting out should get as much experience as possible, right?  Unfortunately, part of that experience teaches you when not to take the stage.

In 18 years, the worst gigs I’ve ever done were unpaid.  Opening for bands, performing at a conference, opening a meeting…no, no and no.  These are the types of gigs that if you’re going to do, you should charge a ridiculous amount for. They’re extremely challenging and odds are, the audience isn’t expecting a comedy show. When a crowd isn’t expecting OR paying for comedy, your job becomes 10 times harder.

When this happens, you’re doing a disservice to the comedy industry because the next morning all of those people will vent: “…And they had a comedian up there trying to be funny, and it was awful.”

“So many comedians just aren’t funny these days.”

“I know, I think I’ll boycott the local shows forever!”

Perhaps an exaggeration, but in the long run, you’re going to hurt the reputation of that many people’s opinion on live stand-up comedy.

The next part is, once you’re actually a legit comedian who has been paid multiple times for performing, don’t give it away. It’s the same as asking your tattoo artist buddy for a freebie, or some other artisan to give their skill away. It cheapens the industry. The only exception for this is when you’re performing for charity or showcasing for something that might further your career. As a poor comic, it’s nice to be able to donate the only thing that you can sometimes.

As I said, this post was brought on by something I was just asked to do. A colleague at UMSL asked if I could do a session in a teacher workshop this September. I agreed because it’s a day out of my classroom, I can sell books, and I like sharing tips and ideas with fellow teachers. Once approved, she added that I can “wake up the workshop with 25 minutes of my comedy bit” at 8:30 in the morning. 25-year-old Rob would’ve happily agreed, but 40-year-old Rob knows better. This is something I’d charge at least $500 for suffering through and that’s not in their budget. I kindly declined and explained why.

For more tips on how to make money in stand-up comedy, order my book, Don’t Wear Shorts on Stage via Amazon, Kindle, Nook, etc. 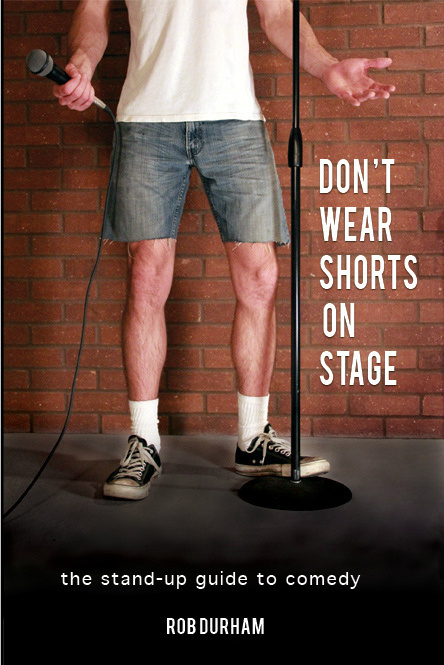 If I could start my comedy career over, here are 6 things I would do differently…

Trust me on these things. If you’re interested in learning more about how to make money in stand-up comedy, check out my book Don’t Wear Shorts on Stage which is available on Amazon, Kindle, Nook, iBooks, etc.

How to deal with hecklers

Order a copy of Don’t Wear Shorts on Stage